The temple site at Phimai Historical Park is a United Nations World Heritage site. Phimai Historical Park is situated at Tambol Nai Muang in the Phimai District about 60 km northeast oft he city of Nakhon Ratchasima. It was the site of Prasat Hin Phimai. Prasat Hin Phimai is one of the most important Mahayana Buddhist temple in Thailand. Dating to about 1000 Years ago.

Prasat Hin Phimai is one of the biggest and most important religious sanctuaries found in Thailand. Prasat Hin Phimai was built around the 11th - 12th century A.D. and aditions were made during the 13th century A.D. The ancient city of Phimai is located in the current Phimai town. The old town walls measure 565 by 1,030 m and are rectangular in shape.
These are surrounded by a moat with the Mun River on the north and east sides, the Khem Stream on the south and the Chakarat River on the west flowing to meet the Mun River.
Phimai is probably the same word a Vimaya the latter, appears in the inscription on the door frame of the Southern entrance of the inner wall.  The inscription mentions the name "Kamrateng Chakata Vimaya" and also mentions about the construction of the sacred image called "Kamrateng Chakata Senapati Triloka Yavijaya" in 1108 A.D. Thus it is believable that Phimai is an ancient Khmer Kingdom and its communities and societies have developed progressively then.

Owing to the geography and fertility of Phimai, people have been living there continuously until the present. The Department of Fine Arts has undertaken the restoration of this cultural heritage since announcing the registration of the ancient city of Phimai in the Government Gazette volume 53 dated 27th September 1936. Major restoration were carried out between 1964 and 1969 as a joint project between the Thai and the French Government. The principal prasat was restored with the technique by dismantling the structure, coding each stone block and then restoring them back to their original place. In addition the Department has been undertaking restorations of all the ancient structures in Phimai continuousely and has organized the Phimai Historical Park project which was officially opened by her Royal Highness Princess Maha Chakri Sirindhorn on 12th April 1989.

The city wall was formed by mounding dirt into ramparts. Arched gateways made of laterite are found to the south, west and north. The southern gate, Pratu Chai or Victory Gate, is the best example of the archway form and faces toward Angkor. An ancient road can still be traced leading out from this gate. At that time of use, this road probably served as a major route from Angkor to Phimai.

Directly south of the southern gate is Tha Nang Sa Phom. It is an ancient landing stage. It has a cruciform shape and is made of laterite. There are three stairways, and at the corners on all sides there are traces of holes for pillars and many pieces of baked clay.
This structure adjoins a baray (water reservoir) which measures 700 by 1700 meters. There is an ancient structure called Wat Khok in the middle.

Kuti Rishi, is another ancient structure outside the city wall. This structure is probably one of the "Arokayasala" or hospitals built during the rign of Jayavarman VII. An inscription at Prasat Khan dating to the 13th century describes the order of King Jayavarman VII to build 102 hospitals around the Angkorian Empire.

Inside the city wall there are ancient ponds dug to provide water for consumption. Now they are called "SraKaew", "Sra Phlung" and "Sra Khwan". Outside the city there are further two ponds called "Sra Phleng" to the east and "Sra Bohd" to the west.

The Meru Bhramathat is a brick chedi standing on a high mound inside the city wall. It probably got its name from a folk tale called "Nang Orapim and Thao Pajit", which refered to it as a place for the cremation of King Bhramathat. The timing of its construction is not preciserly known, but is assumed to date to late Ayutthaya period (18th century).

The Naga (mythical snake) Bridge is the sandstone platform leading to the "Gopura" an anched gateway located in the southern outer wall of the Prasat. The Naga Bridge has a criciform shape measuring 4m by 31,70m. 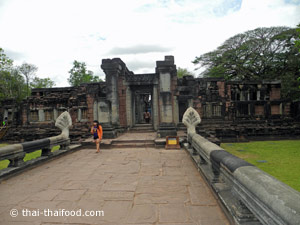 The body of the naga forms the rail of the bridge. The nagas have seven heads arranged in the form of a cobra spreading its hood. The bridge is the beginning point for the journey to the sacred religious centre of the Prasat. The bridge also represents the connection between heaven and Mahayana Buddhist belief systems. 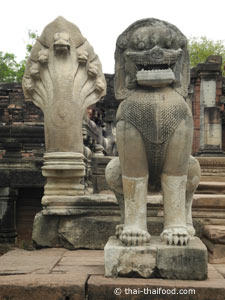 The artistic style is the Angkor Wat periot of the 12th century A.D.A statue of a lion adorns the area at the foot of the stairs. The Naga bridge is meant to link the human and heavenly realms in accordance with Buddhist and Hindu cosmology.

The arched gateways or "Gopuras" set in the center of each of Kamphaeng kaew (the outer wall). 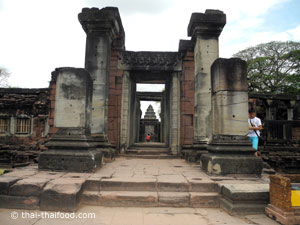 The northern and the southern gateways are in the middle of the walls - while the east and the west gateways are slightly to the north. The plan of the Kamphaeng kaew structure is cruciform. 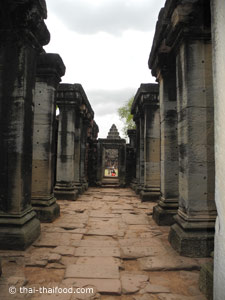 The path from Kamphaeng kaew to the inside of the ancient city is believed to be an entrance heavenly realm where deities reside.

The sandstone passage way to links the southern arched gateway of the outer wall to that of the inner wall or "Rabieng Khot", the latter sorrounds the central tower. 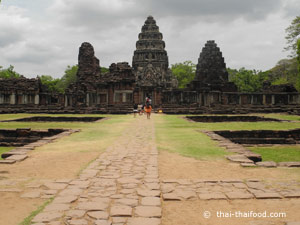 The passage way is a 1m high raised platform. 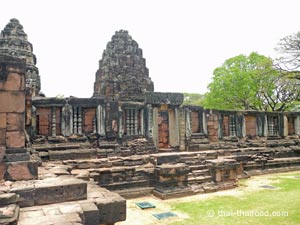 A large number of roof-tile pieces and baked clay baralis (roof finials) were found during restaurations. Hence, the passage way was presumably originally covered by a tile roof supported by wooden pillars.

The gallery is a long rectangular building sourrounding the inner Courtyard of the sanctuary. 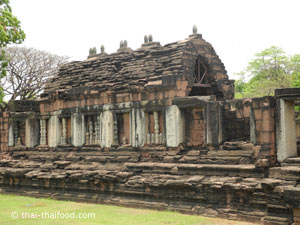 The inner walls have true windows, while the outer have false windows adorned with stone balustrades known as "lukmahuat" important evidence of the Phimai sanctuary has been found at southern entrance of the inner gallery in the form of an inscription on a statue. Kamratend Chakata Vimaya by a local ruler named Senapati Trilohayavijaya in 1108.

A rectangular building formerly called "Khlang Ngern" is located west of the naga platform leading to the sanctuary. 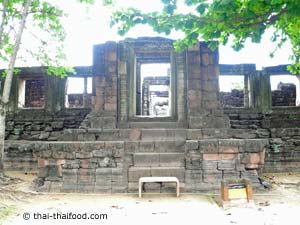 Its location suggests that it was probably used as a robing pavillion for the king and nobles for religious ceremonies, and a place for preparing offering processions. During the excavation and restauration in 1968, a large amount of archaeological relicts were found including sacred images, decorative objects and bronze coins. "Khlang Ngern" is a place where monetary items are stored and hence its name.

The outer courtyard between the inner and the outer walls house two rectangular sandstone buildings, the Bannalais. 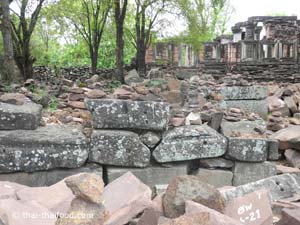 The Bannalais had raised floors and were separated into many long rooms. Evidence of square pillars were found. Formerly the buildings might have wooden roofs covered with tiles. The Bannalais were probably places to store religious holy scriptures.

There is one basin in each corner of the outer courtyard. The sides of the basins are lined with sandstone. Excavations reveal that architectural pieces, such as pillars, walls and door frames are placed there. Formerly this area used to be the loctions of temples, for example, Wat Sra Phleng, Wat Phra Prang Yai, Wat Bodh, and Wat Phra Prang Noi. The basins may have been constructed for the temples. These temples and basins probably date to the late Ayutthaya period. (18th century).

Enclosing the central tower is a high raised sandstone wall. It is similar in appearence to Kamphaeng Kaew, in that, it has arched gateways in the centre of the wall on all four sides. The position of each gateway is in line with those of the city gateways and the entrances to the sanctuary. Important evidence was found at the southern arched gateway - an inscription in ancient Khmer on the door frame. The inscription indicates a date between 1108 and 1112 and mentions the contruction of sacred images, the establishment of the city, the names of high ranking nobility and also the name of King Dharanindravaraman I.

The Principal Tower - The main Prang

The inner courtyard, the most important part of the sanctuary, houses the central tower and was constructed with white sandstone around 11th - 12th century. Unlike other Khmer religious structures which generaly face to the east, the central sanctuary faces to the south. 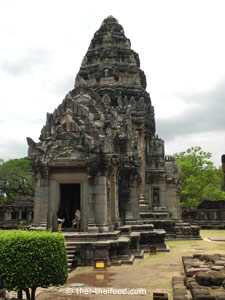 It comprises two important parts - the Mandapa or antechamber and the Dhaty or the main temple. Carvings appear on different parts of the tower, for example, the gables and the lintels. These carvings usually depict episodes from the Ramayana and the story of Buddhism. However, the carvings on the southern side of the tower show dancing Shiva. The interior of the main temple is called the Garbhagrha Room. It is the most important because it houses an important sacred image. Near the northeastern corner of this room, there is a holy water conduit, called the Somasutra that passes through the floor to outside.

Ho Brahm or the Brahman Shrine is a building constructed with sandstone and laterite on the same base as Red Stone Prang. In 1954, seven sandstone Shivalingas were found inside the shrine. It is believed that this place was used to perform Hindu ceremonies. However, from the plan and location of the building, it is likely that the building was originally used as Bannalai or a storage place for keeping holy scriptures.

Prang Hin Daeng or the Red Stone Tower on the right of the central sanctuary was constructed around the 13th century. 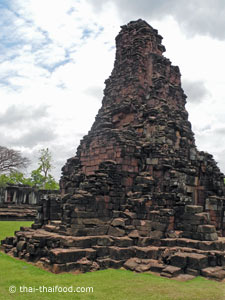 Above the northern door frame, there is a sandstone lintel engraved is bas reliefs depicting the episode of Khrishna hunting wild boars. On the other door frames at the west, east and southern entrances, there are only traces of pillars in classical Khmer style decorating the frames.

Prang Bhramathat, the laterite tower southeast of the principal tower, has a square base with entrances built as porches in a cruciform shape. 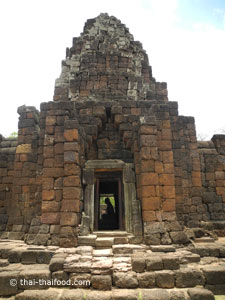 Inside the tower two important sculptures were found. One was a large sandstone statue of a man sitting cross-legged. It is thought to be the sculpture of King Jayavarman VII or Thao Brahmathat as is usually called by country folk. Another sandstone sculpture is a woman in kneeling posture. Her head and arms are broken and lost. She is believed to be the Queen Jayarajathevi and called "Nang Orapim" in local folklore. These two sculptures are now exhibited at the Phimai National Museum.

There are the remains of two Buildings - the twin Libraries. 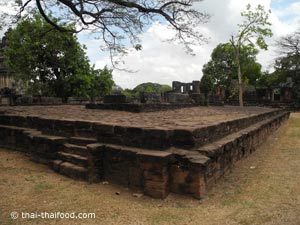 The libraries are almost completely ruined. Only the basement and one entrance of the libraries and a part of the wall remained.

At the inner courtyard on the east side of the principal tower, there is a sandstone structure built in a square shape with indented corners. It is 8.15m square and 0.7m high. There is a square hole in the middle of the floor and large holes also at each edge of northern and southern sides. The side oft the structure that faces the central tower is bound by a projecting square balcony. It is assumed that this raised floor was associated with some kind of ceremony.

Getting to Phimai Historical Park